Good progress is being made on the R260 million Refinery Interchange upgrading project where Plattekloof Road crosses the N7 and the Malmesbury railway line.

Work began in July 2021 and is expected to be completed in January 2024. When the project is complete, two lanes of traffic will be able to travel in both directions along Plattekloof Road across the N7 and the railway line.

The single carriageway bridge over the road (the overpass bridge) and the bridge over the railway line were built in 1965 and 1969 respectively. Plattekloof Road has since been upgraded by the City of Cape Town to a dual carriageway on either side of the interchange, which means there is currently a bottleneck along this stretch of the road.

The single carriageway overpass bridge will be replaced by two overpass bridges to permit future upgrades of the N7, and the railway bridge will be widened. In addition to the two 3.7 m wide lanes in both directions, an additional 3.7 m wide turning lane and 3 m pedestrian sidewalk will be built on the southern side of the road. The existing pavement structure on Plattekloof Road and on the interchange ramps will be replaced.

The project is expected to generate close to 63 000 person-days of work and 550 work opportunities, as well as training opportunities. In addition, the contractor has undertaken to create opportunities for subcontractors and material and construction equipment suppliers to benefit from the works.

During construction, two-way traffic will be accommodated on the existing Plattekloof Road while the new westbound carriageway and overpass bridge is being built. Once that is complete, the two-way traffic will be redirected onto the new westbound carriageway. The road will be built in partial widths. The intersections with traffic lights will be operated as three-way stop intersections. Temporary closure or occupation of traffic lanes will be permitted during agreed daylight or night-time working hours.

This is a large project and will have an impact on the following areas:

We know that large projects such as these bring inconvenience during the construction phase, but the medium- and long-term benefits to the area and economy make this a worthwhile investment.

This significant investment in the road network to accommodate the growth in the area and to improve our road network is an essential enabler of economic growth. It shows that the Western Cape Government believes in infrastructure-led growth. 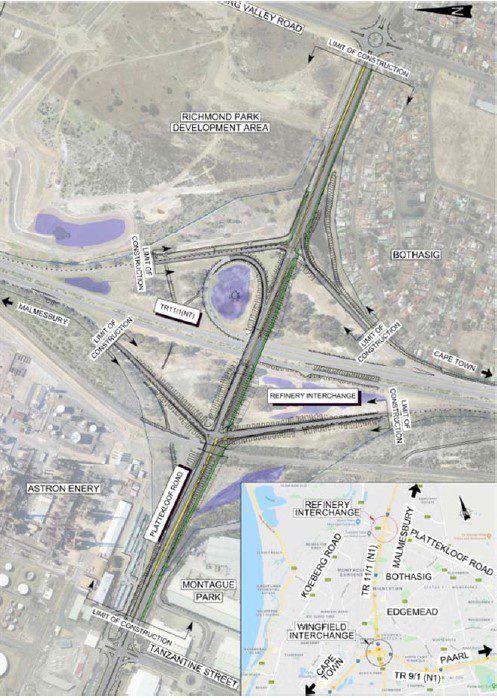 Pietermaritzburg construction worker hospitalized after being struck down...

Fatal crash into a construction vehicle at Boontjieskraal...

Premier Winde and Minister Mitchell to open the...