I am passionate about empowering local and young entrepreneurs.

It gives me great honour to be part of this project that created job opportunities for local residents and emerging CIDB contractors.

The Baden Powell Drive project worth R283 million was awarded to Civils 2000 (Pty) Ltd with a 24-month contract period. It commenced on 12 April 2018 with a scheduled completion date of 14 April 2020.

However, there have been several extensions for reasons relating to extra work to accommodate new City of Cape Town water services, a revision to access to accommodate new development, as well as dealing with work disruptions linked to the current COVID-19 pandemic. 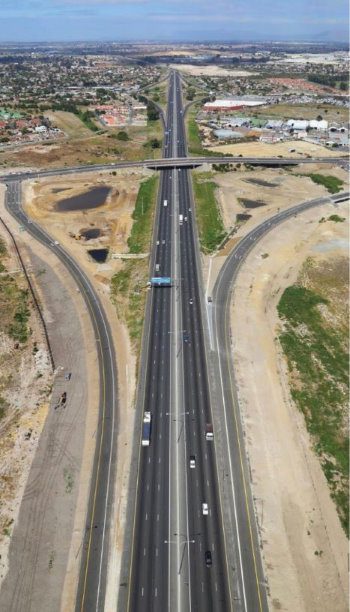 Baden Powell Drive, also known as the R310, is a busy arterial road that runs from Muizenberg to Stellenbosch. It is the main access road between Stellenbosch and Cape Town via the N2 and provides access to Cape Town International Airport, the Cape Town Film Studio, industrial hubs, wine farms and various townships. The road is also heavily used by tourists, cyclists and pedestrians, particularly on weekends.

Based on high traffic volumes and the need to rehabilitate the existing single carriageway, my Department’s Road Network Management Branch launched a project in 2018 to upgrade approximately 5km of the R310 between the N2 and Vlaeberg Road within the City of Cape Town and Stellenbosch Municipality. An additional project element was the upgrading of the quarter link at the partial interchange between Baden Powell Drive and Van Riebeeck Road.

Traffic along the route fluctuates considerably with high seasonal and weekend peaks because it is one of the main gateways to the Stellenbosch Wine Route area. It is a commuter route between Stellenbosch and Cape Town and carries traffic from Cape Town International Airport. The route is also utilised by pedestrians and cyclists to access employment and leisure opportunities on the surrounding wine farms and residential estates.

The estimated Annual Average Daily Traffic in both directions in 2017 was approximately 16 000, with heavy vehicles accounting for 6% of this volume.

The only street lighting along the road was at the Cape Town Film Studio and De Wijnlanden intersections. For safety reasons and due to the high traffic volumes, street lighting has been installed over almost the full length of the project.

The main items that were executed under the project are as follows: 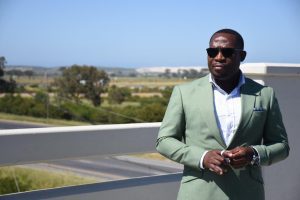 It was a requirement of the contract that a significant amount of training be carried out, including environmental awareness, road safety for construction workers, laying underground services, flag operator duties, and basic firefighting.

Civils 2000 participated in the Contractor Development Programme through awarding subcontracts to emerging contractors in the 3CE to 5CE range, following a structured pre-qualification and tender process. Once appointed and on-site, these subcontractors were mentored, guided and assisted by Civils 2000 throughout their involvement with the project.

A large part of the process involved the transfer of engineering skills, entrepreneurial skills and generic skills to these emerging contractors.

Five emerging contractors with CIDB gradings of 3CE to 5CE were utilised and carried out work worth a total of approximately R21 million.

Work done by 5CE contractors consisted of the construction of asphalt berms, walkways, paving, gabions and road marking, while work undertaken by 3CE contractors entailed the installation of kerbing and precast culverts.
Improving travelling time and easing congestion remain our priority. We will continue to invest in our roads to make them safe for our road users and for economic purposes.